15 Years to the Top of Mt Denman 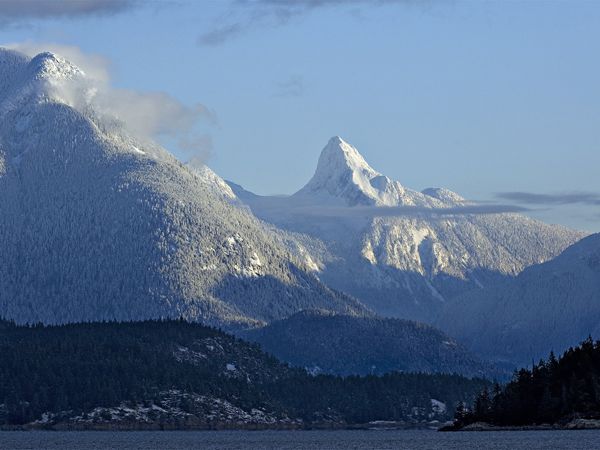 Above: Mt Denman in winter.

Below, spring, from the back. In the far distance is Vancouver Island. That's Desolation Sound with all the islands. 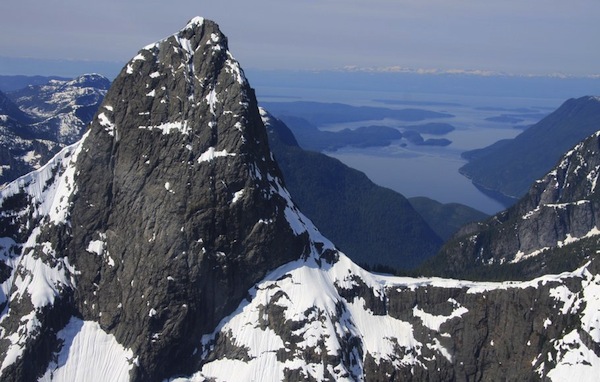 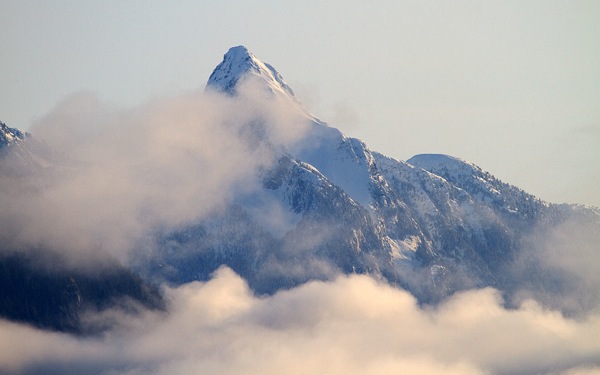 Mt Denman, Canada's Matterhorn, rising from the sea at the end of Desolation Sound, BC...

Mount Denman (1920 m, 6299 ft straight up from the sea) is located on mainland British Columbia due east of Campbell River, BC on Vancouver Island. It towers above Desolation Sound and sits about half way up Vancouver Island.

Do not go to Denman Island to get to the mountain. They share the name but Denman Island is far to the south near Hornby Island BC. 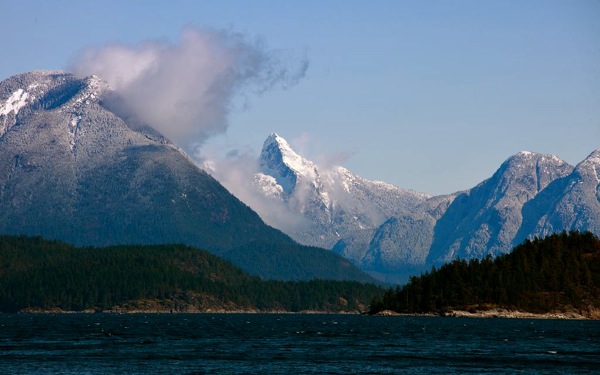 It is a steady day's paddle from Cortes Island’s eastern point of departure at Cortes Bay or Squirrel Cove to Mount Denman. Or, as we did in 1998 a leisurely two day paddle up Desolation Sound from home on Tiber Bay at the SE corner of Cortes Island.

As you approach East Redonda Island the channel gets narrower and the mountains steeper. Did you know that East Redonda is the highest island per circumference of any island on the planet?

Eventually you get to Forbes Bay at the foot of Mt Denman, the summer camp grounds for the Klahoose band. Easy flat landing for a boat to walk in from to solid land. Lots of places to stash a kayak in the bush as well.

From there you follow a very very old logging trail for several miles up the valley using its decayed log bridges to cross streams and chasms...very tricky in places!

You can find this trail about two thirds or so up the beach from the camp but hidden by bush for a ways in. Or, now there is a trail following Forbes Creek that goes quite a way but then you'll have to find a way through the bush and up the valley at the end of that trail...better to find a tangent before the end where the bush is not so thick. Eventually if you keep a sharp lookout you may find the old skidding trail.

Once on the way down we found an old cedar grove that was not logged because the trees were hollow. One was so big that all four of us could stand inside one giant old growth cedar tree!

It’s a tough slog because of all the underbrush. Go about 2 and 1/2 steady hours from the bay past the second dry stream bed. Then you turn, going up a vertical mile of steep bush whacking. The only way we did it was to stop every hour and down some delicious almond chocolate!

It is very easy to screw up here! If you go too far to left or right as you work your way up, you will at day's end many hours later hit serious cliff barriers. Unless you are ready to climb them, you will be stuck.

Years later this happened on another attempt of Mt Denman with a party of four and we had to abort the trip. There is no easy way to work your way around and you drop altitude. Then it starts to get dark! and no where flat to camp!

So get a great map and GPS and plot the route well! It is actually a fairly narrow channel to get through to the saddle of Mt Denman without screwing up!

Eight hours later we made it to the alpine where we found a lovely campsite beside one of the many streams that drains the saddle of the mountain (left side while facing it).

But there are very few sites so if it is late grab any where it is a bit flat. Do not get too fussy!

The next morning we went down the scree slope beside the ridge until we found an access point which we scrambled up and onto the ridge.

That's the middle ridge of the three you see. The left, the middle and the far right. It is like a pyramid summit and Mt Denman sure reminds me of the Matterhorn in Switzerland.

You can do it as a very advanced hike if you drop from the saddle to the bottom of the snow scree slope on the left side of the middle ridge. You can find a way to the ridge and follow that ridge all the way until it gets steep. At that point there is a wide traverse across the face to the far right ridge and easy up that to the summit. It looks hard from below but it is not...lots of good grips and minimal exposure.

A few times there is exposure but nothing requiring ropes. It is a good idea to bring a rope even if you are not doing a climb. It can come in handy to scramble up or down some tricky spots on the way up to the saddle or summit depending on the skill levels of your party. You are in serious back country there, so nice to have a rope!

And if need be, your cell phone should work from there, at least on the summit it did! Chatted with my Mum in Montreal. If she actually saw a picture of where I was she would have freaked out! I just said the view was incredible to distract her!

Of course if you want a technical climb then you will find it going direct from the top of the saddle. We went for an advanced hike and not a climb.

But this is a very challenging hike from an endurance point of view but so worth it!

And then you are on the top of Mt Denman!

It took 5 hours from the campsite to the summit and the views of all the Discovery Islands, Gulf Islands and Vancouver Island are incredible! Cortes Island looked so tiny and we could see where we live. You see all the islands from Savory to Quadra Island and down to Denman Island and Hornby Island.

You can see Vancouver Island fading off to the horizon near the tips both north and south. It was a perfect clear sunny day!

You can see Mt. Waddington on the northeast side and the vast mountain ranges and glaciers that surround it. And of course you look down on to the Redonda Islands.

Fifteen years, that’s how long it took for this dream to come true!

Mt Denman... what a mountain! 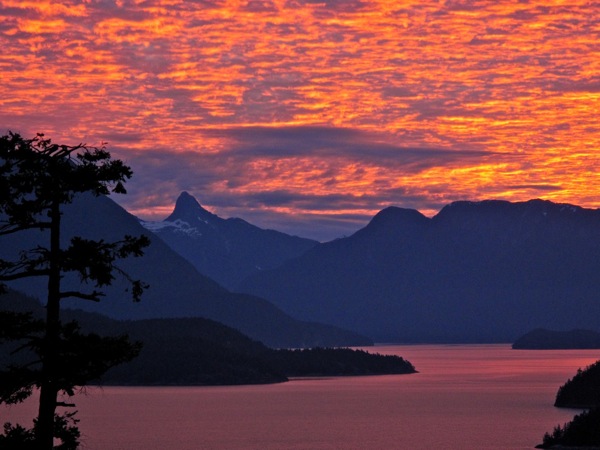 Ever since I started coming to Cortes Island in 1984 I would look up Desolation Sound and see the Matterhorn-like peak of Mt. Denman waiting to be climbed.

My first attempt was in 1998 but failed because I cut my finger badly and needed to paddle home to get stitches! A friend tried 5 times before eventually succeeding! He had been turned back by bad weather, bad bugs (take no-see ums' netting for face!) and just poor luck hitting cliffs high up. But finally in mid September the next year I made it with my friend and neighbour Ralph.

Mt Denman is spectacular both from below and on top. It dominates Desolation Sound, and from the top you can see the whole of Vancouver Island in one panoramic vista.

The next day we went towards Mt. Aiken on the left. The alpine was vast and spectacular. Some good scrambles there. Well worth the extra day. One could spend a lot of time in that alpine. We were blessed with perfect weather each day.

The next morning we broke camp at 8am and made it down to the bay in 5 hours. We took an hour pit stop at Forbes Bay (we had stashed some beer and grub) and then paddled back to Cortes Island's Tiber Bay and home in a double kayak in four and a half hours! Just in time for a fabulous pot luck feast!

What an incredible trip! The hiking up and down the mountain was brutal because of the lack of a trail and the angle of the terrain but it sure was worth the reward of sitting on top of such a majestic mountain!

ps. Couldn't resist...went up Mt Denman again with four friends in early August 2007! But failed four years before missing the route through to the saddle as we hit serious cliffs very late in the day!

Do have fun, pack out your garbage, respect the Klahoose land and let me know how you made out right here on the site by building your own web page to share! 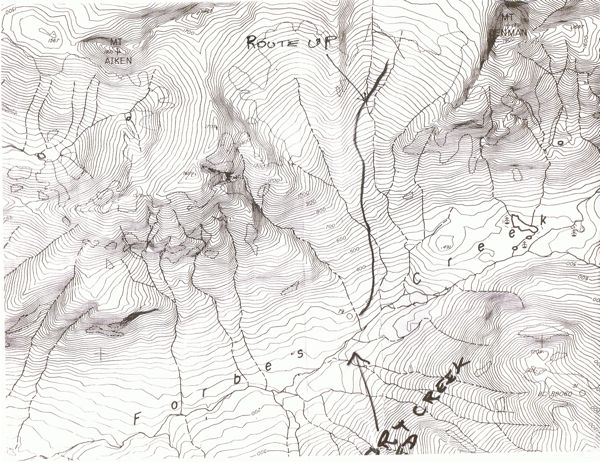 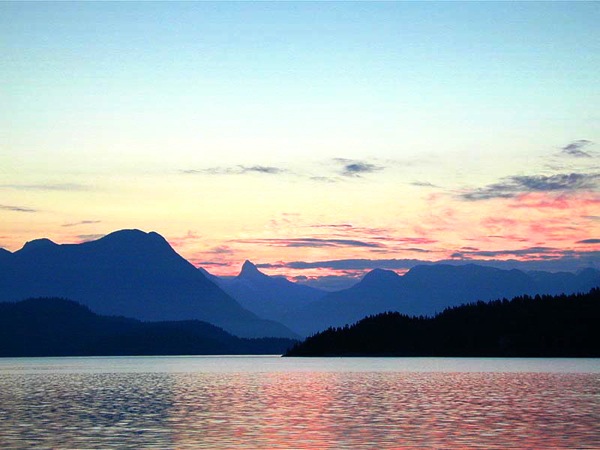 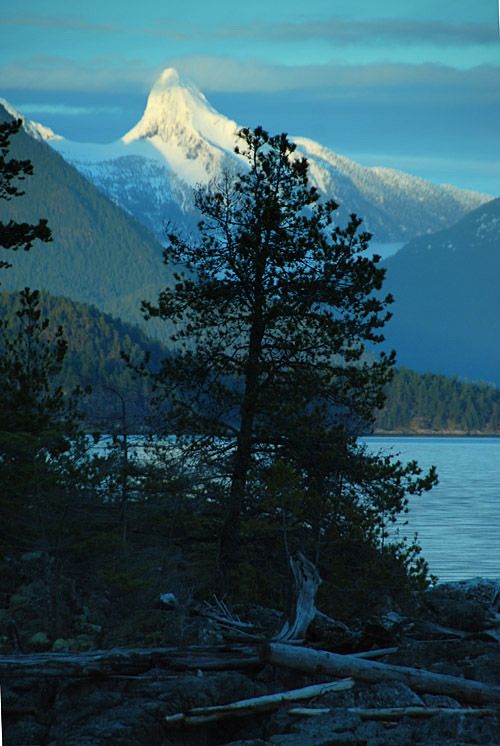 My friend and neighbour Irene took this glorious picture a few days ago.

Here is what she says about the picture:

"When I took it a few days ago, it felt like the air was clearer than it's ever been. Usually my telephoto lens doesn't do so well (and it was handheld)."

Check out her other amazing photos!

Do You Have A Great Story or Pictures About Mt Denman?

If you have been here, then you gotta have a great story about your visit...

...and if you been to Mt Denman, we would love to hear about it!

We (Sarah, Kerry, and Chris) paddled packrafts in from desolation sound, hiked up the homfray drainage with much bushwhacking, circled back west along …

hi there, great to see you have summited Mount Denman. I am planning to do the same, and am just wondering: is the logging road you took on the north or …

Mt. Denman is easy to spot: some of the other mountains that make up the skyline looking east from Cortes Island are harder to identify. Way over to …

Kayak approach from lund,summit reached on day 4 after spending one weather day in the north west col. Awesome!

Other Mountains in Desolation Sound Not rated yet
Hi, The story of climbing Mt.Denman was highly interesting and informative. I've often longed to climb it. However, I'm also interested in other peaks …